The history of the world (Or this site)

The history of the world (Or this site)

I’ve always wanted to make games. Ever since I was a young boy I used to spend hours on my dads Spectrum ZX and Apple IIe writing lines of basic to create simple text based games with simple INPUTS, PRINTs and GOTOs. Silly games, but it’s how I started to program at a very young age.

That desire stayed with me through out my journey to where I am now, along the way I picked up more and more experience in all types of programming and even managed to progress past test based games.

While I was still in college in 2005, during the summer vacation, we got about 3 months off, I started playing a game called second life. Within this game it’s possible to write code and create objects that actually do things. I started making little casino games with in the second life world and sold them in game under the name of Keep Smiling Games. I had a website to show off the various games that you could buy from me and also to provide a blog where you could get updates about the games. That was the first iteration of this site. 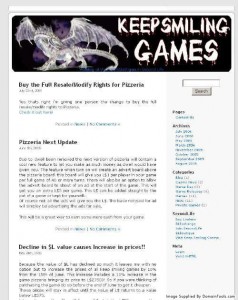 During my time in second life a game called Tringo was incredible popular with the land owners. They could set up the game and have other players come over to play the game, normally there would be a prize pool and the other players would play to win that pot. Seeing the potential for games similar to this (central board where other players would come and compete for the pot) I started designing and building it.

The game was loosely based off an idea from The Sims Online call Pizza, or the Pizza game (I was just told about it by someone I never played it myself). The game involves each player making pizzas of different sizes, you were given a random selection of ingredients each turn, and you got points whenever you sold one. There was other things like bonus pizza types for extra points and a fire that burnt the pizza you were currently working on. Very RND but people seemed to like it and during the first test games I had a full house.

I sold the first copy of the game, and a 1 month exclusivity in an ebay auction; bidding started slow and then started to ramp up with 4 or 5 main people bidding against each other. I still remember the say that the auction was ending, I was at a friends house for his birthday and my dad kept texting me with updates on the auction (No good phone internet in those day). Every few minutes I’d get another text with a higher and higher price until finally it sold for €203.50! For one single copy of a game that I made during my holidays from college. 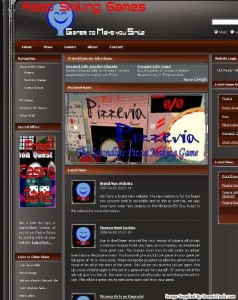 To me that was a huge amount and the first time I was paid for making a game. Originally I was going to price the game at the same price that tringo was selling for, L$15,000 (~US$60) but after the auction, and the price that it went to, I decided to price it at L$25,000 (~US$100) per copy. After the public release I put the game up for sale and people came and bought copies, lots and lots of copies. I’m not sure how many copies of the game I sold, I didn’t really keep proper records but it is probably well over 200. In fact the game is still selling to this day, I have halved the price, about 4-6 copies per year. 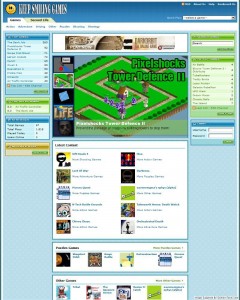 The original change to flash games

I did a few updates and bug fixes to Pizzeria but then started to get bored and new rules came into the second life world in regard to gambling (Silly US and your illegal gambling!) so I just left it be and reaped the rewards for a few years.

Towards the end of 2008, yes summer holidays again, I had been playing a lot of flash games on various portals and I decided with my skills in websites and games that I could launch something similar. The way the flash portals gained players was by sponsoring flash games (Paying a lump sum to the developer to put the portals logo in the game and most of the time having a exclusivity agreement with them too). But I decided that the way I could do this without having to pay for sponsorship was to create the games myself, branding them with my own logo for my site which of course this site!

I bought my first portal software and installed it onto my server. I knew I wanted to get my games from mochimedia (now shut down but we’ll get to that) since they offered an api to get games as well as paying you each time someone played a game hosted on your site.  The software I got already had integration for mochi in it but required you to search for games that you wanted to add yourself which was not really what I wanted. But I stuck with the software and started creating my first flash game. It was a very, very, very simple game with 4 screens that you moved around avoiding guards while trying to pick up items in order to rob a bank. I aptly called it The Bank Job. I packed it up, and sent it off to various flash portals all over the place on the . Basic shapes for graphics, music that I grabbed off newgrounds and a play time of about 3 minutes. It actually didn’t do too badly earning about $80 in advertising revenue in its lifetime. But the main thing was that it started bringing people to my portal and those people started coming back!

Fresh off the back of the “success” of The Bank Job I decide to actually create better, fuller, game. I spent a full 2-3 weeks constantly working on a game based on a game that I used to play as a kid on my dads Mac SE called Factory. The response to that game was huge compared to the previous game with it getting almost 3 times the amount of views which transferred over to my portal nicely.

With the surge of viewers to my portal I knew from my time on other portals that the way to increase visitors returning to the site was to increase engagement and also to maintain a supply of new games onto the site. The current software I was using couldn’t really do either of these things so I decided that I’d write my own portal from scratch taking heavy inspiration from kongregate .com achievements and also to write some code to automatically pull down new games from mochi’s API. 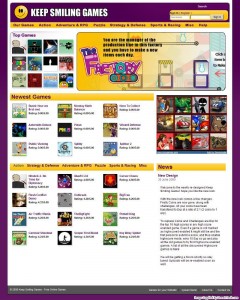 How the site looked until recently

Second part was easy and done quick, the first took a bit longer and while writing the code (which I find easy) I used a similar design to kongregate (design is not something I find easy) which some of the users of kongregate picked up on VERY quickly. This actually resulted in a massive influx of users to the site, but also meant that I had to expedite doing the actual design for the site (It was never meant to stay like that, I just needed something to code around).

Luckily the redesign was not that hard to do and required no back end changes. I launched the new redesigned site, complete with user login, achievements and badges, with a re-skinned, with graphics that I contracted someone else to make, version of my most popular game at the time; Factory. All these cool, custom coded, features worked well and increasing engagement on the site resulting in a quite a nice amount of consistent traffic.

Since it was about this time that I was finishing up in college and looking for a job in the big bad world it seemed like an ideal thing to put on my CV. I’m gland I did since it contributed to me getting my current job!

The site has remained looking like that until the present day, however it actually stopped working at the end of march last year when MochiMedia shut it’s doors. Ever since then I’ve been wanting to get back into making games. So I have decided to get off my ass and do it starting with the redesign of this site for the next era of Keep Smiling Games. You can probably see from the art work at the top of the page, and the fact that it says it on the front page that the first game I’m going to be releasing as a stand alone title of Desktop (PC/Mac/Linux) and Tablet (Android and iOS) is Factory.

I’ll go into more details about my plans in a future blog post, as well as a more detailed breakdown of the flash games that brought to this point. So until then thanks for reading and if you want to hear more please make sure to subscribe to my newsletter.