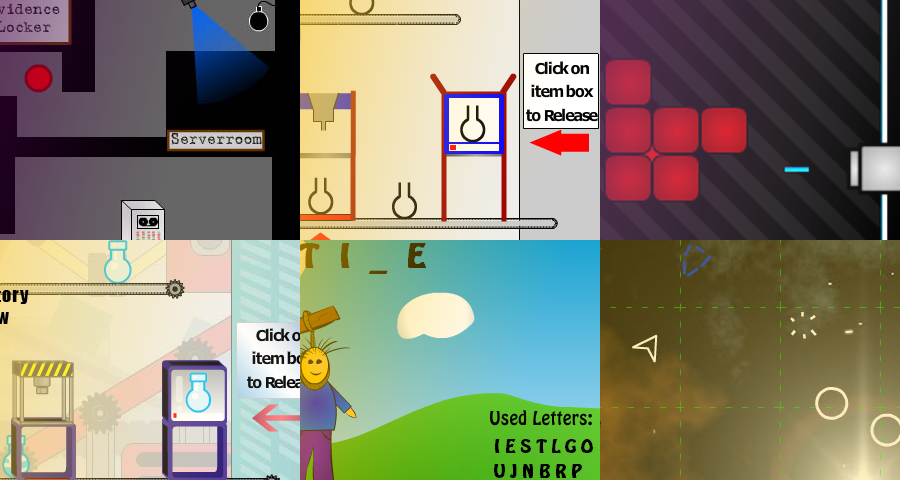 I’ve you’ve read my previous blog post you’ll know that one of my first experience with making games properly was with flash games.

I thought it might be interesting to have a look back at how they did and give you an idea about what the returns were like for some one, who like me, didn’t have a “HUGE” success with their games.

With all the games I mainly monetised them through Mochi Media, which has since shut its doors, and the stats that I give are from a spreadsheet that they sent me when they finished (on the 25/03/2014). The games my have had more views since then but they are untracked. All games shipped with a pregame ad, and some of the later games might have had a mid game ad as well, also there are some great games where you can play slots online and you can find them in sites like themovieblog.com.

So starting from the beginning with The Bank Job, as I’ve previously said, this game was started and finished within a week or so and was mainly me learning how to use flash. The game was definitely not a big success but there were a few people who did like the game and even a few people who ended up doing some speed runs of the game (crazy). I released the game on the 20/09/2008, to the various flash game portals around the web, and through out its lifetime it accumulated 113,282 plays earning me $82.69.

Next up was The Factory based on a stand alone shareware game from way back that I used to play on Mac in the early 90s. I spent a bit longer making this game as I really wanted it to be fun to play. The game was released on 08/10/2008 to a good reception, with one of the biggest problems being the complexity of the game. People had a hard time figuring out what they were meant to do in the game so I later added a tutorial level to talk them through it. This was the first game that I actually got paid for a site specific version of the game, 1 person paid me $100 for an ad free version of the game with their logo on it that was locked to their site, easy money! The game ended with 815,468 game plays earning $479.69 from advertising.

Carver was the next game that I worked on, it was based of a mechanic that was posted on a site that was attempting to create 300 different game mechanics. It ended up being very similar to the posted design but if you are trying to come up with an idea for a game you should really check it out for inspiration. I feel that with a bit of extra work the game could actually be a really great game, I really love the mechanic. The game was released on the 17/12/2008 getting 146,332 game views, not too far off my first game, and earning $42.11 in advertising and $100 for an ad-free version.

At this point Factory was doing really well, but I didn’t really love my graphics so I decided that if I got someone to redo the graphics for the game I could re-release it and possibly get more coverage with the better graphics. So I hired someone to redo the assets for $200, re-skined the game, added a few extra features (and 3 more levels) and released Factory Redux on the 15/01/2009. While it wasn’t a flop, it didn’t get the reaction I was hoping for with a lot of people being disappointed that the game wasn’t a sequel. Again I managed to sell an ad-free version for $100, making up some of the investment. The game got 697,105 game views and earned $179.72. Which was only a $79.72 profit, not great, but that meant that Factory (both versions) had a total amount of game view of over 1.5 million! And this is why I’m going to be taking this game to the next level and releasing it as a full stand alone game with 300% more levels and a ton of other features.

At this point I decided that more games of a slightly lesser quality would mean that I could get more views to my website (the main reason for releasing these games was to try and increase traffic to my game portal website). So I created an emulator in flash for a very early game console (I can’t remember the name) and planned on releasing a load of the games under KSG Retro Series the first being Blitz on the 10/02/2009. It flopped. Seriously. But it was to be expected really. Total views were 19,829 earning $7.32.

After that I took a break for a while, coming back when I heard of a game competition for word based games. I created HangWord which was literally hangman and submitted it on the 12/07/2009. While I didn’t win the competition the game the game did get 245,411 views earning $53.98.

The next game was an attempt to clone a popular genre of endless space shoot-em up called Space Shapes. The main thing I was actually building it for was to test out an AI mechanism for automatically adjusting the game difficulty based on the skill of the player. It worked out pretty good, but ramped up way to quickly. And while I was typing that I realised that because I changed this site the game actually doesn’t work any more…. whoops. Anyway it was a complete flop as well gaining only 48,782 views and earning $18.01.

The Protectors: Revenge of Saarshe was my first attempt at outsourcing the entire game development process. I paid a company in India $275 to completely design, code and do the art work for this game and then released it under my own brand on the 15/11/2009. To be honest I wasn’t hugely impressed with the quality of the game but tower defence games were very popular at the time so it got a total of 1,432,987 views (madness) but only earned $117.54 + $100 ad-free version so it never turned a profit.

And thus ended my experiences with flash games. Not the biggest earner but I learnt a few things and it is definitely part of my history so that’s why I’ve left the games up on the site. Here is a summary of all the games in a nice table.